Corporate Outings can be a stimulating intermix of fun and learning. This can be better when the place has the right mix of resources for your sight-seeing. Vadodara’s distinguished natural beauty unified with divine art and architectures, exemplifies it as one of the best for corporate outings. To name one best place for corporate outing near Vadodara would be unfair. However, taken the tight time span in a Corporate Outing, the city of Champaner is probably, what we recommend. Popularly known as Gujarat’s historical city, Champaner is situated in Panchmahal district, almost 50km away from Vadodara. In 2004, the city was announced as the World Heritage Site. The significance of this announcement, was based on the rich history and heritage that defines the land of Champaner. 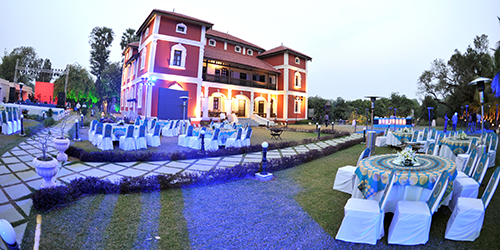 Champaner was found by Vanraj Chavda in the 8th century. He was also the most popular ruler of the Chavda Dynasty. The city got its name from Champaraj, who was a dear friend of the king. For a brief time in the 15th century, Champaner was also a territory of the Chauhan Rajputs. However, by the 16th century, Mahmud Begada, the then Sultan of Gujrat attacked the city and conquered it. The city of Champaner gained prominence when Humayun, the descendant of the Babur Clan, was chasing Bahadur Shah. Today, the ruins and remains of the city can be seen in the Champaner Pavagadh Archaeological Park.

Built in 1513, a rare artwork of Muslim and Hindu architectures can be witnessed in Jami Masjid. The most renowned structure, during Mahmud Begada’s time, Jami Masjid is undeniably a pre-possessing architecture. With a height of 150 feet, nearly 200 pillars, 7 mihrabs, octagonal minarets, Jami Masjid proves again, the finesse and grace of architects during those times.

For a fascinating hill climbing experience, the Pavagadh Hills can be the most adventurous part in your corporate outing. Elevated at 2600 feet, Pavagadh Hills used to be a volcanic cone almost 500 million years ago. The sight of the reddish yellow appearance of the rocks accompanied by the rivers flowing between them can be cherished in a delightful ropeway experience.

Together making these experiences life-like, Champaner Heritage Resort invites you to grace yourselves in our abode. As much as making a pleasant corporate outing at Champaner, our resort gives you the right corporate ambience to arrange your meetings and events. From precocious technological support to great food and service, we provide the best hospitality for your corporate stay.